The latest issue of the Colorado Journal of International Environmental Law & Policy (Vol. 18, no. 3, Summer 2007) is out. The issue's theme is International Water. Contents include:

Conference: Is There a New Common Law of Investment Arbitration?

George Washington University Law School will host a symposium on Is There a New Common Law of Investment Arbitration?, October 16, in Washington, DC. The program is here. Why attend?

Is the application of treaty standards producing common principles of investment arbitration? Are arbitral decisions striking an equitable balance between the competing interests involved?This one-day symposium will provide a critical appraisal of arbitral tribunals’ application of the substantive standards enshrined in investment treaties.

The latest issue of International Organization (Vol. 61, no. 4, October 2007) is out. Contents include:

This article documents the rise of nonconsensual international lawmaking and analyzes its consequences for the treaty design, treaty participation, and treaty adherence decisions of nation states. Grounding treaties on formal consent has numerous advantages for a decentralized and largely anarchic international legal system that suffers from a pervasive "compliance deficit." But consent also has significant costs, including the inability to ensure that all nations affected by transborder cooperation problems join treaties that seek to resolve those problems. This "participation deficit" helps to explain why international organizations, international tribunals, and sub-groups of states sometimes create legal rules that bind countries without their acceptance or approval. Such rules have wide applicability. But they also can significantly increase sovereignty costs, exacerbating the compliance deficit.

Nonconsensual international lawmaking thus appears to create an insoluble tradeoff between increasing participation and decreasing compliance. This article explains that such a tradeoff is not inevitable. Drawing on recent examples from multilateral efforts to prevent transnational terrorism, preserve the global environment, and protect human rights, the article demonstrates that the game-theoretic structure of certain cooperation problems, together with their institutional and political context, create self-enforcing equilibria in which compliance by all states is a dominant strategy. In these situations, nonconsensual lawmaking reduces both the participation deficit and the compliance deficit. In other issue areas, by contrast, problem structure and context do not alter preexisting incentives to defect and the tradeoff between the two deficits remains unaltered. Analyzing the differences among these issue areas helps to identify the conditions under which nonconsensual lawmaking increases the welfare of all states.

Susan Rose-Ackerman (Yale - Law) will give a talk today at the the Duke University School of Law's Global Law Workshop on "Treaties and National Security."
Posted by Jacob Katz Cogan at 6:41 AM

On September 26, Mexico deposited its instrument of accession to the Hague Convention of 30 June 2005 on Choice of Court Agreements, thereby becoming the Convention's first Contracting State. In accordance with its Article 31(1), the Convention will "enter into force on the first day of the month following the expiration of three months after the deposit of the second instrument of ratification, acceptance, approval or accession." (Acknowledgement: Conflict of Laws .Net.)
Posted by Jacob Katz Cogan at 6:36 AM

Videos of the recent Senate Foreign Relations Committee hearings on the Law of the Sea Convention are now available here (September 27) and here (October 4).
Posted by Jacob Katz Cogan at 6:33 AM

The latest issue of the Journal of International Criminal Justice (Vol. 5, no. 4, September 2007) is out. Contents include:

The latest issue of the American Journal of Political Science (Vol. 51, no. 4, October 2007) is out. Contents include:

Previous scholars have argued that international treaties can increase investment by serving as a bond to clarify rules regarding investment, but the empirical literature often fails to find an effect of treaties on investment. In this paper I develop a formal model of bonding and investment, and use an experiment to test the model's internal validity. In the experiment subjects choose how much to invest in another person who has made a prior decision about whether or not to purchase a bond. I find that the option to purchase a bond has multiple effects on investment. First, players purchasing a bond can induce greater investment, but only if the bond is large. Second, if the second actor does not purchase a bond there is a significant decrease in investment relative to the control condition. Third, the first player is more likely to behave consistent with game theoretic equilibrium as the size of the bond increases. One implication of these results is that the inability to find empirical evidence for international treaties' effectiveness may occur because many treaties do not impose bonding costs that are sufficient to induce greater investment.

This Essay considers how cities' climate advocacy fits into regulation of greenhouse gas emissions and impacts. In particular, it integrates Janet Levit's exploration of bottom-up lawmaking with Hari Osofsky's work on law and geography to examine the role of cities in transnational environmental networks. Using the examples of Tulsa and Portland, the piece considers the scale of U.S. cities' involvement in the problem of climate change and the implications of these efforts for climate policy. It argues that a "bottom-up networking" approach to understanding these municipal initiatives illuminates a richer version of their regulatory role critical to making progress on this pressing problem.

Workshop: Turner on "Defense Perspectives on the Tension Between Politics and Law in International Criminal Trials"

Lecture: Koskenniemi on "The Advantage of Treaties"

Martti Koskenniemi (Univ. of Helsinki - Law) will give the Tercentenary Public International Law Lecture at the University of Edinburgh School of Law, on October 25th. The lecture is entitled "The Advantage of Treaties: International Law in the Enlightenment." This is one in a series of lectures celebrating the tercentenary of the University's first chair in law. The final lecture in the series - on public law - will be given by Justice Antonin Scalia, on December 11. Podcasts of the lectures to date have been posted here.
Posted by Jacob Katz Cogan at 8:47 AM

Lecture: Higgins on "The Rule of Law: Some Sceptical Thoughts"

On Tuesday, October 16, Judge Rosalyn Higgins, President of the International Court of Justice, will give the British Institute of International and Comparative Law's Annual Grotius Lecture. Judge Higgins's lecture is entitled "The Rule of Law: Some Sceptical Thoughts."
Posted by Jacob Katz Cogan at 8:46 AM

Yesterday, the President transmitted to the Senate, for its advice and consent to ratification, the Protocol of 2005 to the Convention for the Suppression of Unlawful Acts against the Safety of Maritime Navigation (the 2005 SUA Protocol) and the Protocol of 2005 to the Protocol for the Suppression of Unlawful Acts against the Safety of Fixed Platforms Located on the Continental Shelf (the 2005 Fixed Platforms Protocol). The transmittal package (Treaty Doc. 110-8) is here. A State Department fact sheet is here. The fact sheet states: "The SUA Protocol provides the first international treaty framework for combating and prosecuting individuals who use a ship as a weapon or means of committing a terrorist attack, or transport by ship terrorists or cargo intended for use in connection with weapons of mass destruction programs. The SUA Protocol also establishes a mechanism to facilitate the boarding in international waters of vessels suspected of engaging in these activities." The Protocols were adopted by an International Maritime Organization Diplomatic Conference on October 14, 2005. The United States signed the Protocols on February 17, 2006, shortly after they were opened for signature. To date, there are two parties to the 2005 SUA Protocol and no parties to the 2005 Fixed Platforms Protocol.
Posted by Jacob Katz Cogan at 10:28 AM 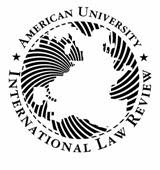 The latest issue of the American University International Law Review (Vol. 22, no. 5, 2007) is out. Contents include:

Posted by Jacob Katz Cogan at 7:13 AM

Dunoff: Dysfunction, Diversion and the Debate Over Preferences: (How) Do Preferential Trade Policies Work?

Jeffrey L. Dunoff (Temple Univ. - Law) has posted Dysfunction, Diversion and the Debate Over Preferences: (How) Do Preferential Trade Policies Work? (in Essays on Developing States in the WTO, forthcoming). Here's the abstract:

Should the trade regime provide differential treatment to developing states? Or are uniform, nondiscriminatory rules more appropriate? Twenty years ago, in Developing Countries in the GATT System, Robert Hudec used political economy arguments to claim that preferential trade policies harmed developing states. This essay, part of a volume marking publication of a new edition of Developing Countries, argues that Hudec's claims are necessarily limited by the methodological approaches he used, the theory of trade politics he adopted, and the ontology of the international system that he drew upon. The paper examines Hudec's arguments in light of subsequent scholarship on preferences that uses other methodologies, particularly econometrics. Thus, the paper seeks to examine what we know about preferences, and how we know it. Moreover, in juxtaposing different methodological approaches, the paper suggests a progressive research agenda designed to enhance our understanding of how preferences work and, in particular, their effects on developing states.

The Brooklyn Law School will host a symposium on Corporate Liability for Grave Breaches of International Law, November 16, in Brooklyn. The program is here. Why attend?

The symposium’s panels will compare doctrinal and theoretical bases for civil liability for human rights abuses by corporations, paying special attention to the Alien Torts Claims Act in the United States. It will also examine the concepts of "aiding and abetting" and complicity as applied to allegations of corporate human rights abuses and consider legal instruments other than civil liability that might be developed to discourage corporations from engaging in human rights abuses. Such alternative instruments include domestic and international criminal law, the use of disclosure under different regulatory regimes, and the United Nations' Human Rights Norms for Corporations.

Posted by Jacob Katz Cogan at 8:47 AM

The latest issue of the Revue de droit international, de sciences diplomatiques et politiques (Vol. 85, no. 2, Mai-Août 2007) is out. Contents include:

Posted by Jacob Katz Cogan at 7:33 AM

The latest issue of the Journal of International Arbitration (Vol. 24, no. 5, October 2007) is out. Contents include:

Posted by Jacob Katz Cogan at 7:29 AM