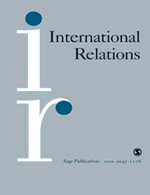 Koh: Presence and Politics at the International Criminal Court

Steven Arrigg Koh (Office of International Affairs, U.S. Department of Justice) has posted an ASIL Insight on Presence and Politics at the International Criminal Court.
Posted by Jacob Katz Cogan at 2:08 PM

Sloane: Puzzles of Proportion and the 'Reasonable Military Commander'

This article offers modest reflections on jus in bello proportionality. It suggests that the law of armed conflict (LOAC) build on the only consensus legal standard that exists: that of the good-faith reasonable military commander. The difficulty — here, as with any reasonableness standard — is to identify factors that realistically can, and legally should, guide adherence to it and to consider the objective and subjective dimensions of judgments under the standard. Part II scrutinizes the content and status of Additional Protocol I’s (API) canonical definition of proportionality. It analyzes its text and context to bring out the extent to which API compels more, and more diverse, subjectivities and indeterminacies than commonly recognized. This is not a problem to be solved; it is an inexorable feature of the principle. Part III therefore critiques perhaps the most popular effort to invest proportionality with more precise substantive content: the idea that it requires elites to conduct hostilities "as if" their own noncombatants were the ones at risk. Part IV considers the prospects for promoting proportionality within the spectrum of lawfulness authorized by the current standard. Those prospects depend on dynamics exogenous to the letter of positive international law but not, for that reason, beyond the influence of international lawyers. Empirical data suggest, for example, that the conceptual redefinition of victory in certain conflicts may encourage elites to respect proportionality conservatively as a matter of sound policy. Yet the point lies less in the validity of this example than in what it illustrates: to operationalize proportionality, the LOAC must identify new dynamics that have (sometimes) supplanted reciprocity. Today’s conflicts have their own characteristic dynamics; the comparative demise of reciprocity did not leave a vacuum. These dynamics might well be impressed into the law’s objective of aligning strategic and humanitarian objectives to further the viability and value of proportionality in modern LOAC. 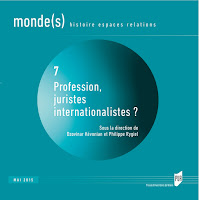 The latest issue of Monde(s). Histoire, Espaces, Relations (no. 7, May 2015) focuses on the theme "Profession, juristes internationalistes ?" Contents include:
Posted by Jacob Katz Cogan at 3:51 AM

Stahn: The Law and Practice of the International Criminal Court

Carsten Stahn (Leiden Univ. - Law) has published The Law and Practice of the International Criminal Court (Oxford Univ. Press 2015). Contents include:
Posted by Jacob Katz Cogan at 6:10 AM

Brölmann: Typologies and the ‘Essential Juridical Character’ of Treaties

Legal scholarship, doctrine and practice differentiate between treaties. References to ‘peace treaties’, ‘environmental treaties’, ‘fundamental treaties’, ‘contract treaties’, ‘constitutional treaties’, ‘self-executing treaties’ are a received part of public international law discourse. Classifications of treaties are also not new. In his 1930 article for the British Yearbook of International Law, McNair distinguished between ‘widely differing functions and legal character of the instruments which it is customary to comprise under the term “treaty”. This chapter aims to trace classifications of treaties prevalent in international affairs today, and to look at their significance within and outside the law of treaties framework. Findings may further our understanding of the various treaty typologies used, often without clarity about the implications.

Posted by Jacob Katz Cogan at 3:48 AM

A reminder that the final workshop of the Annual Seminar Series of the Centre for Law and Society in a Global Context will take place on June 25-26, 2015. The topic is: "Constructive Links or Dangerous Liaisons? The Case of Public International Law and European Union Law." The program is here. Here's the idea:

After an introductory roundtable discussion held in October 2014 on the general aspects of the relationship between EU law and PIL to set the scene, the project 'Beyond Pluralism? Co-Implication, Embeddedness and Interdependency between Public International Law and EU Law' opened in medias res, analysing specific legal areas from the viewpoint of both the EU and PIL in a series of ‘thematic dialogues’ (on monetary policy, energy & environmental law, human rights, crime, justice & terrorism, and common foreign & security policy), taking place from October 2014 to March 2015. An inductive methodology has been followed, based on direct observation of the respective thematic field, intended to allow contributors to draw conclusions on the actual processes of reception, compliance and/or contestation between the EU and international legal orders on that basis. This concluding two-day workshop will serve to put findings into perspective, reflect upon them and consider how best to articulate the link between the two regimes, possibly re-defining their relationship and offering a comprehensive account of their interaction, overcoming the limitations of monist, dualist and pluralist approaches.

On June 29, 2015, the Académie de droit international humanitaire et des droits humains, the faculties of law at the Université de Fribourg and the Université de Genève, the Institut de hautes études internationales et du développement, and the Département fédéral des affaires étrangères will hold a conference in honor of Nicolas Michel. The program is here.
Posted by Jacob Katz Cogan at 2:20 PM

Blog Symposium on Ratner's The Thin Justice of International Law

This week, EJIL Talk! and the Ethics & International Affairs Blog will hold a symposium on Steven R. Ratner’s The Thin Justice of International Law: A Moral Reckoning of the Law of Nations (Oxford Univ. Press 2015). Several posts are already up at EJIL Talk!, including those by Steve, Anne Peters, and Jean d'Aspremont.
Posted by Jacob Katz Cogan at 12:12 PM

Merkouris: Article 31(3)(c) VCLT and the Principle of Systemic Integration

In Article 31(3)(c) VCLT and the Principle of Systemic Integration: Normative Shadows in Plato’s Cave the author tackles a provision on treaty interpretation that has risen in prominence, Article 31(3)(c) VCLT. This article, which enshrines the principle of systemic integration, and its exact scope has become and continues to be a hotly debated subject in academic and judicial circles. Through an examination of both its written and unwritten elements, the author argues that the ‘proximity criterion’ is the optimal way of understanding and utilizing this provision, that conflict resolution principles may be of use within Article 31(3)(c) and finally, that the principle of systemic integration is indispensable not only for interpreting treaty provisions but customary international law as well.

Posted by Jacob Katz Cogan at 6:10 AM

The latest issue of the Revista Latinoamericana de Derecho Internacional (no. 2, 2015) is out. Contents include:
Posted by Jacob Katz Cogan at 3:48 AM

In addition: (1) 17.6% of the arbitrators were women, and there was a significant age difference such that male arbitrators were approximately ten years older than women; (2) for those acting as international arbitrators, we could not identify a significant difference in the number of appointments women and men obtained; (3) depending upon how development status was defined, developing world arbitrators accounted for fifteen to twenty percent of arbitrators; and (4) for all measures used to analyze development status, arbitrators from the developing world received a statistically lower number of appointments than their developed world counterparts.

Given the self-identified concerns and the symbolic legitimacy of broader representation, the international arbitration community may wish to explore factors inhibiting full utilization of untapped talent and facilitate aims of procedural, and potentially distributive, justice. Structural and incremental strategies could then promote a sustainable international arbitration system for the future.

The latest volume of the Netherlands Yearbook of International Law (Vol. 45, 2014) is out. Contents include:
Posted by Jacob Katz Cogan at 9:33 AM

The latest issue of the International Studies Quarterly (Vol. 59, no. 2, June 2015) is out. Contents include:
Posted by Jacob Katz Cogan at 6:11 AM

Ramcharan: The Law, Policy and Politics of the UN Human Rights Council

The UN Human Rights Council is the leading human rights organ of the United Nations and, ten years after it was established, it has attracted commendation as well as severe criticism. Its universal periodic review is widely recognized as a valuable process of international cooperation to advance the universal implementation of human rights. However, it has been criticized for not acting effectively and fairly in dealing with situations of shocking violations of human rights in many parts of the world. It is an international organ with the highest responsibilities to uphold universal values but, at the same time, it is a political organ of United Nations Member States, and it shows the characteristics of both a values-based body and a theatre of political drama.

It is the merit of this book to present the Human Rights Council in terms of its mandates, roles and organization while seeking to remind the membership and the international community at large that the Council must be anchored in the modern human rights law of the Charter - of which the author gives a superb presentation. The book then proceeds to make the case that human rights are part of international constitutional law and this is exceedingly important at a time when universal values have come under stress from various quarters including from terrorist formations. The argument of the book is essentially that the modern human rights law of the Charter and the human rights provisions of international constitutional law must take precedence for everyone, everywhere.

Posted by Jacob Katz Cogan at 3:43 AM

The Australian and New Zealand Society of International Law will hold its 23rd Annual Conference on July 2-4, 2015, at the Victoria University of Wellington. The theme is: "International Law-Making at a Crossroads: Participants, Processes and Principles." The program is here. Here's the idea:

Nations often turn to international courts to help with overcoming collective-action problems associated with international relations. However, these courts generally cannot enforce their rulings, which begs the question: how effective are international courts? This book proposes a general theory of international courts that assumes a court has no direct power over national governments. Member states are free to ignore both the international agreement and the rulings by the court created to enforce that agreement. The theory demonstrates that such a court can, in fact, facilitate cooperation with international law, but only within important political constraints. The authors examine the theoretical argument in the context of the European Union. Using an original data set of rulings by the European Court of Justice, they find that the disposition of court rulings and government compliance with those rulings comport with the theory's predictions.