New Issue: Journal of Human Rights and the Environment

The latest issue of the Journal of Human Rights and the Environment (Vol. 12, Special Issue, December 2021) is out. Contents include:
Posted by Jacob Katz Cogan at 5:24 PM

Labels: Journal of Human Rights and the Environment, Journals

The Université Paris 1 Panthéon-Sorbonne invites applications for a Professor of Public International Law and Regional Law to join its law school. Details are here.
Posted by Jacob Katz Cogan at 5:06 PM

Jackson: Causation and the Legal Character of Command Responsibility after Bemba at the International Criminal Court

Miles Jackson (Univ. of Oxford - Law) has posted Causation and the Legal Character of Command Responsibility after Bemba at the International Criminal Court. Here's the abstract:

This article concerns the issue of causation under Article 28 of the Rome Statute of the International Criminal Court and the related foundational question of the legal character of command responsibility under that provision. It has two aims. First, it notes that across the proceedings in Bemba, judges were united in understanding command responsibility as a mode of liability. It then sets out four different positions on the question of causation in Bemba and argues that none is convincing – that none is able to escape the tensions that follow from that understanding on the legal character of command responsibility. Second, it suggests that the Court revisit that foundational understanding itself: it proposes that the Court interprets Article 28 as establishing a separate offence of omission and argues that such a reading of the Statute is plausible and attractive in principle and policy terms.

The latest issue of International Environmental Agreements: Politics, Law and Economics (Vol. 22, no. 1, March 2022) is out. Contents include:
Posted by Jacob Katz Cogan at 2:34 PM

This collection of essays in honour of Frans Viljoen shines a light on the increasingly important place of compliance in international law. With essays from leading scholars in the field of international human rights law, this festschrift provides compelling analysis of the nature of compliance in the African human rights context, the challenges that affect its place in these legal systems, and the ways in which increased compliance can be achieved.

The volume is divided into three parts exploring: theoretical perspectives, thematic perspectives, and institutional perspectives. Each in turn helps to build a picture of theory and practice charting the historic developments of human rights law with several case studies to illustrate. Contributors provide detailed comparison with other national legal systems, such as the Inter-American IACHR and Court, placing these reflections in their global comparative context. The work concludes by considering the ways in which challenges can be overcome to achieve increased compliance with international human rights law in Africa.

The ESIL Interest Group on International Courts and Tribunals has issued a call for papers for a workshop on "De-formalizing the International Judiciary," to be held as a side-event to the ESIL 2022 Annual Conference on August 31, 2022. The call is here.
Posted by Jacob Katz Cogan at 6:33 PM

The American Society of International Law has issued a call for papers for two "New Voices" sessions for junior scholars and practitioners to present their works-in-progress at the 2022 ASIL Annual Meeting. Here's the call:

The Annual Meeting Committee plans to include two "New Voices" sessions that will provide a platform for junior scholars and practitioners to present their works-in-progress. The Society invites submissions from current students, non-tenured scholars, and junior practitioners on any topic of international law related to the theme of the meeting.

Abstracts should be well developed and reflect advanced progress on a paper that will be presented at the Meeting. Drafts of the papers will be due to the commentator by March 17, 2022.

Send your abstract to asilannualmeeting@asil.org by no later than Monday, February 28, 2022 at 12 noon ET, with the subject line "New Voices Proposal." Please send the abstract as a Microsoft Word attachment, including your name and contact information (email address & affiliation). Abstracts should be no longer than 500 words. Selected authors will be notified by Friday, March 4, 2022.

Call for Submissions: 20th Anniversary of the Entry into Force of the Rome Statute

Ius Inter Gentes – Revista de Derecho Internacional y Relaciones Internacionales has issued a call for submissions for a special issue on "20th Anniversary of the Entry into Force of the Rome Statute." The call is here.
Posted by Jacob Katz Cogan at 5:53 PM

The Palestine Yearbook of International Law has issued a call for submissions for its volume 24. The deadline March 31, 2022. The call is here.
Posted by Jacob Katz Cogan at 4:04 PM

The latest issue of the Vanderbilt Journal of Transnational Law (Vol. 54, no. 5, November 2021) is out. Contents include:
Posted by Jacob Katz Cogan at 2:43 PM

Lecture: Ranganathan on "Terra/aqueous: Vexing Vents and Amphibious Legalities in the Anthropocene"

On February 23, 2022, Surabhi Ranganathan (Univ. of Cambridge - Law) will deliver the ninth lecture of the 2021-2022 Essex Public International Law Lecture Series. The topic is: "Terra/aqueous: Vexing Vents and Amphibious Legalities in the Anthropocene." Details are here.
Posted by Jacob Katz Cogan at 11:45 AM

Armitage: George III and the Law of Nations

This article examines how George III, from his early years as prince of Wales in the 1750s through to the twilight of his active rulership in the early nineteenth century, was engaged with what contemporaries called the law of nations, in theory and in practice. It particularly highlights his princely education, how as king he gathered and processed information about imperial and international affairs, and how his constitutional and juridical knowledge shaped his understanding of international relations, the American Revolution, and the abolition of slavery, among other pressing contemporary questions. From an examination of the Georgian Papers at Windsor Castle and the King’s Library at the British Library, a new picture emerges of George III as a thoughtful, engaged, and at times surprisingly radical student of, among other sources, Montesquieu and Blackstone. This portrayal presents George III as a modernizing monarch uniquely well equipped to reflect on the changing nature of sovereignty in an age of revolutions that spanned from his own British kingdoms to the Hawaiian monarchy of King Kamehameha I. An appendix to the article publishes for the first time the precociously critical reflections on slavery and the slave trade George drew from Montesquieu’s De l’esprit des loix in the late 1750s. 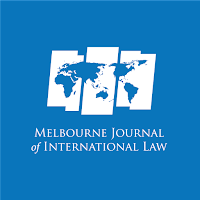 The latest issue of the Journal of International Criminal Justice (Vol. 19, no. 5, November 2021) is out. Contents include:
Posted by Jacob Katz Cogan at 4:06 PM

The latest volume of the Yearbook of International Humanitarian Law (Vol. 23, 2020) is out. Contents include:
Posted by Jacob Katz Cogan at 11:52 AM

The latest volume of the Anuario Colombiano de Derecho Internacional (Vol. 15, 2022) is out. Contents include:
Posted by Jacob Katz Cogan at 5:16 PM

The rights of victims to truth, justice, reparations and guarantees of non-repetition when businesses are involved in past and present abuses are seldom guaranteed. A legacy of impunity has prevailed globally in which economic actors have incurred few legal or financial (indemnity) costs for violating behaviour. Examining cases in Nazi Germany, Argentina, Brazil, Chile, Colombia, Honduras, Perú, the Philippines and South Africa, this edited volume traces business accountability efforts. It identifies the tools applicable to different country contexts that have facilitated corporate accountability for human rights violations, while also flagging the barriers that persist. This volume presents the past and the present of accountability for corporations complicit in gross human rights violations, and also considers what the future may hold.

Schiedermair, Schwarz, & Steiger: Theory and Practice of the European Convention on Human Rights

Stephanie Schiedermair, Alexander Schwarz, & Dominik Steiger have published Theory and Practice of the European Convention on Human Rights (Nomos 2022). The table of contents is here. Here's the abstract:

This edited book brings you a collection of current, critical issues regarding the theory and practice of the European Court of Human Rights. The book is divided into three parts: procedural concerns, principles and jurisprudence, and interaction with national legal systems.