The article examines norm conflicts, defined as situations where one norm constitutes, has lead to, or may lead to a breach of another, and particularly those norm conflicts in which one of the conflicting norms is a rule of human rights law. Such instances occur more and more every day, are increasingly litigated, and can be of great political importance. For example, a human rights treaty might prohibit the preventative detention or internment of persons under any circumstances, while the UN Security Council might pass a resolution actually authorizing such detention, say in relation to suspected terrorists. What does then happen when a state's obligations under a human rights treaty conflict with its obligations under the UN Charter?

In that regard, one possible solution is that pursuant to Article 103 of the UN Charter, obligations under the Charter - including binding Security Council resolutions - prevail over conflicting treaty obligations of the UN member states. The article will explore whether the Council can displace international human rights treaties, and if so, how can such a development be curtailed or avoided. It will elaborate on various forms of norm conflict resolution and avoidance, and will discuss the recent jurisprudence of the House of Lords (Al-Jedda), the European Court of Human Rights (Behrami and Bosphorus) and the courts of the European Union (Kadi). The article thus provides a systematic overview of the impact of norm conflicts on the protection of human rights in a fragmented international legal order.

China's success in attracting foreign direct investment (FDI) in the last decade is undisputed, and unprecedented. It is currently the second largest FDI recipient in the world, a success partially due to China's efforts to enter into bilateral investment treaties (BITs) and other international investment instruments. The second title to publish in the new Oxford International Arbitration Series is a comprehensive commentary on Chinese BITs.

Chinese investment treaties have typically provided international forums for settling investment disputes such as the International Centre for the Settlement of Investment Disputes (ICSID). Given the continuous growth of FDI in China, the emergence of state-investor disagreements in China and the dramatic rise of investment treaty based arbitrations world wide in recent years, it is anticipated that there will be an increasing number of investment arbitrations involving the central and local governments of China. This book will provide a detailed review and analysis of China's approach to foreign investment. It will consider the current role of investment treaties in China's foreign economic policy, analyse and interpret the key provisions of the BITs, and discuss the future agenda of China's investment programme. It will look at how this investment regime interconnects with the domestic system and consider the implications for a foreign investor in China.

Kelly: The Politics of International Economic Law: Legitimacy and the UNCITRAL Working Methods

The process of international lawmaking is, in part, a function of both politics and the attempt to engage in legitimate norms generation. States seek power through process in the international sphere. But States also use process enable representative, transparent, and effective rules. This paper considers how we might begin to deconstruct procedural proposals involving international norm generation by taking a look at a recent controversy over the methods of work at the United Nations Commission on International Trade Law (UNCITRAL). It will consider various paradigms to assess the legitimacy claims of international norms as applied to one particular controversy and consider specifically whether proposals to regulate decision-making as well as the participation of nonmembers serve legitimacy or politics or both.

Paul Stephan (Univ. of Virginia - Law) will give a talk today at the University of Georgia School of Law International Law Colloquium Series on "Privatizing International Law."
Posted by Jacob Katz Cogan at 12:04 AM

International law develops in a fragmented way to address functional needs. This has resulted in the development of special “regimes” of norms and decision‐making procedures and accompanying international organisations. There is much scholarship about allegedly autonomous legal regimes addressing international trade, human rights, humanitarian law, environmental protection and other issues. The need to resolve conflicting norms between regimes has led to recommendations by the International Law Commission. Less attention, however, has been given to the way in which, in the default situation of diversity and concurrent activities, regimes interact, and how international law might help to shape this interaction.

Knox: The Boundary Waters Treaty: Ahead of Its Time, and Ours

John H. Knox (Wake Forest Univ. - Law) has posted The Boundary Waters Treaty: Ahead of Its Time, and Ours (Wayne Law Review, forthcoming). Here's the abstract:

Article IV of the 1909 Boundary Waters Treaty between Canada and the United States, which prohibits harmful transboundary water pollution, foreshadows the prohibition on transboundary environmental harm expressed as Principle 21 of the 1972 Stockholm Declaration. The terms of Article IV and Principle 21 are similar, as is the failure of states to comply with them. Canada and the United States have fallen short of their obligations under Article IV by establishing standards that are more specific but that states need exercise only due diligence to meet, and by failing to apply even these standards to boundary waters other than the Great Lakes. As a result, Article IV seems not only ahead of its time, but ahead of ours as well.

Turner & Mohtashami: A Guide to the LCIA Arbitration Rules

The London Court of Arbitration (LCIA) is one of the world's foremost arbitration institutions, with a growing annual caseload. The LCIA Arbitration Rules are among the most modern and forward-looking of the various sets of institutional arbitration rules but until now have not been the subject of in-depth study. This is the first full length and comprehensive commentary on the rules, written by two well-known and experienced arbitration practitioners. Portable and functional, this book acts as a guide and provides an indispensable resource for all involved in international arbitration under the LCIA rules.

Grouped thematically, the commentary to each rule provides 1) a description of the rule and its intended meaning 2) the provenance and history of the rule 3) the practical effect of the rule with reference to previous case law and jurisprudence and 4) a comparative look at conceptual and practical differences between each rule. Focusing specifically on how the rules of the LCIA differ from those of the ICC and the UNCITRAL, this title emphasises the international nature of the LCIA and provides the only dedicated reference to the Rules.

Pierre Rosanvallon (Collège de France) will give a talk today at the New York University School of Law Institute for International Law and Justice International Legal Theory Colloquium on "The Metamorphoses of Democratic Legitimacy."
Posted by Jacob Katz Cogan at 12:03 AM

The latest issue of the Journal of World Intellectual Property (Vol. 12, no. 2, March 2009) is out. Contents include:

The current issue of the Rutgers Law Review (Vol. 61, no. 1, Fall 2008) contains the proceedings of a 2008 symposium on "The United Nations Genocide Convention: A 60th Anniversary Commemoration." Contents include: 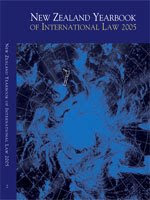 The latest volume of the New Zealand Yearbook of International Law (Vol. 5, 2007-2008) is out. Contents include:

The latest issue of the Journal of World Intellectual Property (Vol. 12, no. 1, January 2009) is out. Contents include:

The latest issue of the Journal of International Economic Law (Vol. 12, no. 1, March 2009) is out. Contents include:

The latest issue of the Virginia Journal of International Law (Vol. 49, no. 3, Spring 2009) is out. Contents include:

Lecture: Goodman on "Detention of Civilians in the Armed Conflict with Al Qaeda"

This Wednesday, April 1st, Ryan Goodman (Harvard Univ. - Law) will deliver the Annual Solf-Warren Lecture in International and Operational Law at the Judge Advocate General's Legal Center and School, Charlottesville, Virginia. The title of his lecture is "Detention of Civilians in the Armed Conflict with Al Qaeda." It is based on this article, which was just published in the American Journal of International Law.
Posted by Jacob Katz Cogan at 9:43 AM

Kruessmann: ICTY: Towards a Fair Trial?

Thomas Kruessmann has published ICTY: Towards a Fair Trial? (Intersentia 2009). The table of contents is available here. Here's the abstract:

The ICTY does not merely represent a historical stage in the development of international criminal justice which can now be put aside and left to legal historians. It also has a lasting impact, due to the fact that its Rules of Procedure and Evidence are judge-made law, tested in the fire of court practice and frequently amended to take the latest developments into account. Finally, with the arrest of Radovan Karadžić, a new chapter has been opened for the Court. This volume thus provides not only an account of all the debates revolving around the proper role of international criminal justice and a contribution to the developing academic discipline of “transitional justice”; it also opens up a perspective to the International Criminal Court and asks what procedural legacy the ad hoc tribunals for Yugoslavia and Ruanda provide for the future of international criminal procedure.

The latest issue of the International Review of the Red Cross (Vol. 90, no. 871, September 2008) is out. The theme is Human Rights. (The free full-text edition is available here.) Contents include: