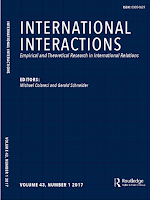 Mackenzie-Gray Scott: State Responsibility for Non-State Actors: Past, Present and Prospects for the Future

Richard Mackenzie-Gray Scott (Univ. of Oxford - Bonavero Institute of Human Rights) has published State Responsibility for Non-State Actors: Past, Present and Prospects for the Future (Hart Publishing 2022). Here's the abstract:

This book investigates how state responsibility can be determined for the wrongdoing of non-state actors. Every day, people, businesses and societies around the world pay a price arising from interactions between states and non-state actors. From insurrections that attempt to create new governments, to states arming belligerent proxies operating overseas, to companies damaging natural environments or providing suspect services, the impact of such situations are felt in numerous ways. They also raise many questions relating to responsibility. In answering these, State Responsibility for Non-State Actors provides a picture of what the law governing this area is, what it could be, and what it should be in light of past histories, present realities and future prospects.

Johns, Langer, & Peters: Migration and the Demand for Transnational Justice

Domestic courts sometimes prosecute foreign nationals for severe crimes—like crimes against humanity, genocide, torture, and war crimes—committed on foreign territory against foreign nationals. We argue that migrants can serve as agents of transnational justice. When migrants move across borders, as both economic migrants and refugees, they often pressure local governments to conduct criminal investigations and trials for crimes that occurred in their sending state. We also examine the effect of explanatory variables that have been identified by prior scholars, including the magnitude of atrocities in the sending state, the responsiveness of the receiving state to political pressure, and the various economic and political costs of prosecutions. We test our argument using the first multivariate statistical analysis of universal jurisdiction cases, focusing on multiple stages of prosecutions. We conclude that transnational justice is a justice remittance in which migrants provide accountability and remedies for crimes in their sending states.

A call for papers has been issued for a workshop on “Developing Robust and Sustainable Ocean Regimes for Uncertain Futures,” to be held April 28, 2023, at the Yong Pung How School of Law, Singapore Management University. The call is here.
Posted by Jacob Katz Cogan at 10:55 PM

Labels: Calls for Papers, Law of the Sea, Workshops

The latest issue of the American Journal of International Law (Vol. 116, no. 4, October 2022) is out. Contents include:
Posted by Jacob Katz Cogan at 8:18 PM

On December 15-16, 2022, the European Papers Jean Monnet Network will hold a conference on "Are the EU Member States Still Sovereign States Under International Law?," at the Sapienza University of Rome. Program and registration are here.
Posted by Jacob Katz Cogan at 12:01 PM

The latest issue of the European Journal of International Relations (Vol. 28, no. 4, December 2022) is out. Contents include:
Posted by Jacob Katz Cogan at 5:40 AM

de Vries-Zou: Common Convictions and the Interpretation of Custom

Ivo Tarik de Vries-Zou (Univ. of Groningen) has posted an ESIL Reflection on Common Convictions and the Interpretation of Custom.
Posted by Jacob Katz Cogan at 3:31 AM

Conference: Toward a Human Right to Claim Innocence

On November 2-4, 2022, an online conference will be held on "Toward a Human Right to Claim Innocence." Program and registration are here.
Posted by Jacob Katz Cogan at 9:23 PM

The International Courts and Tribunals Interest Group of the American Society of International Law has issued a call for papers for a works-in-progress workshop on February 3, 2023, in Chicago. The call is here.
Posted by Jacob Katz Cogan at 9:01 PM

The journal Athena – Critical Inquiries in Law, Philosophy and Globalization has issued a call for submissions for its volume 3, no. 2 on the topic "New order or world disorder?" The call is here.
Posted by Jacob Katz Cogan at 8:56 PM

Cowell: Defensive Relativism: The Use of Cultural Relativism in International Legal Practice

Frederick Cowell (Birkbeck, Univ. of London) has published Defensive Relativism: The Use of Cultural Relativism in International Legal Practice (Univ. of Pennsylvania Press 2022). Here's the abstract:

In the face of multiple global challenges, in many IOs major policy-making initiatives are under way. In the last two years alone, the WHO started negotiations on a pandemic treaty, the UN kicked off talks on a plastics pollution treaty and the WTO is engaged in ground-breaking initiatives on topics ranging from e-commerce and investment facilitation to plastic pollution and fossil fuel subsidies. In all of these talks and discussions, a central question is how to fairly and effectively engage external stakeholders. While lagging behind for decades, the WTO has also woken up to the potential of more actively engaging stakeholders in international trade policy-making, both to make better policies and mitigate implementation challenges. This contribution describes the ground-breaking steps taken in a number of Member-led informal discussions and dialogues: the Trade and Environmental Sustainability Structured Discussions (TESSD) and the Informal Dialogue on Plastics Pollution and Environmentally Sustainable Plastics Trade (IDP). The objective of this contribution is to describe and applaud recent developments and initiate a discussion on how the process can be made more inclusive and robust and, potentially, also be extended to formal WTO activities. In this context, the WHO’s ongoing negotiations on a new pandemic treaty are used to offer an interesting point of comparison.

Proportionality analysis (PA), which is widely used by national and international courts to balance between conflicting public goals or private rights, is typically considered to be a rational process. But is it? Does the framing of the legal case affect the decision-making of (judicial) actors? And if so, are legal professionals more or less likely to be affected by the framing?

We analyze theoretically and experimentally how features of PA might influence the outcome of the decision through behavioral effects, such as biases, heuristics, and framing. In the experiment, subjects conduct a PA for legal cases that vary only in their framing, where the wording is designed to nudge subjects to either support or oppose the legal act that is challenged as disproportional. We contrast three groups of subjects: administrative judges, law students, and non-law students.

Our analysis yields three key findings. First, we find evidence of framing effects in PA; second, the effects are mitigated by legal training (non-law students are the most susceptible, followed by law students and then judges) and third, judges demonstrate only weak bias in PA, but do fall prey to other unrelated behavioral effects. The findings thus highlight the importance of framing effects but also the potentially debiasing effect of legal training and professional expertise when in a professional context.