Volumes 331 and 334 of the Recueil des Cours, Collected Courses of the Hague Academy of International Law (Martinus Nijhoff Publishers 2009) are out. Contents include: The Routledge Handbook of International Law provides a definitive global survey of the interaction of international politics and international law. Each chapter is written by a leading expert and provides a state of the art overview of the most significant areas within the field.

A comprehensive survey of the state of the discipline, The Routledge Handbook of International Law is an essential work of reference for scholars and practitioners of international Law.

Gostin: Influenza A(H1N1) and Pandemic Preparedness Under the Rule of International Law

A novel strain of Influenza A (H1N1) spread rapidly through Mexico in April 2009 and now spans the globe. By the time WHO was notified and responded, geographical containment was not feasible, leading the agency to call for mitigation. The international outbreak of SARS in 2003 and the more recent Influenza A (H5N1) among birds with limited transmission to humans helped prepare the world for the current pandemic threat. SARS galvanized the WHO to revise the antiquated International Health Regulations (IHR) in 2005, which took effect June 15, 2007. Governments instituted preparedness plans in response to avian influenza. Despite increased preparedness, the WHO and US Centers for Disease Control and Prevention (CDC) lack key powers and resources. Reminiscent of past responses, many governments are acting out of fear or economic and political self-interest rather than scientific reason. Above all, there are serious questions of global justice, as Mexicans are subject to stigma and discrimination. This article by Lawrence O. Gostin, O’Neill Professor of Global Health Law at Georgetown University, analyses WHO powers and resources including the pandemic alert system and the IHR, as well as the powers and resources of the CDC. He finds that although the response to H1N1 has been strong, the WHO and CDC need more authority and resources to deal with pandemic threats under the rule of international law.

The latest issue of the Chinese Journal of International Law (Vol. 8, no. 2, July 2009) is out. Contents include:

Posted by Jacob Katz Cogan at 6:13 AM

The latest issue of the Loyola of Los Angeles International & Comparative Law Review (Vol. 30, no. 3, Summer 2008) contains a symposium on international courts and tribunals. Contents include: 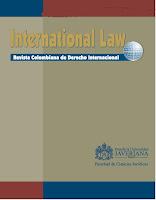 The latest issue of International Law: Revista Colombiana de derecho Internacional (No. 13, November 2008) is out. Contents include:

The latest issue of International Legal Materials (Vol. 48, no. 2, March 2009) is out. Contents include:

The latest issue of the Journal of International Arbitration (Vol. 26, no. 4, August 2009) is out. Contents include:

The latest issue of the Journal of International Criminal Justice (Vol. 7, no. 2, May 2009) is out. Contents include:

The latest issue of the International Journal of Human Rights (Vol. 13, no. 1, 2009) is out. Contents include:

The latest issue of the Journal of Conflict Resolution (Vol. 53, no. 4, August 2009) is out. Contents include:

Johannes Morsink (Drew Univ. - Philosophy) has published Inherent Human Rights: Philosophical Roots of the Universal Declaration (Univ. of Pennsylvania Press 2009). This is another volume in the series Pennsylvania Studies in Human Rights. Here's the abstract:

Confronting the evils of World War II and building on the legacy of the 1776 Declaration of Independence and the 1789 French Declaration of the Rights of Man and of the Citizen, a group of world citizens including Eleanor Roosevelt drafted the Universal Declaration of Human Rights. Adopted by the United Nations in 1948, the Universal Declaration has been translated into 300 languages and has become the basis for most other international human rights texts and norms. In spite of the global success of this document, however, a philosophical disconnect exists between what major theorists have said a human right is and the foundational text of the very movement they advocate.

In Inherent Human Rights: Philosophical Roots of the Universal Declaration, philosopher and political theorist Johannes Morsink offers an alternative to contemporary assumptions. A major historian of the Universal Declaration, Morsink traces the philosophical roots of the Declaration back to the Enlightenment and to a shared revulsion at the horrors of the Holocaust. He defends the Declaration's perspective that all people have human rights simply by virtue of being born into the human family and that human beings have these rights regardless of any government or court action (or inaction). Like mathematical principles, human rights are truly universal, not the products of a particular culture, economic scheme, or political system. Our understanding of their existence can be blocked only by madness and false ideologies. Morsink argues that the drafters of the Declaration shared this metaphysical view of human rights. By denying the inherence of human rights and their metaphysical nature, and removing the concepts of the Declaration from their historical and philosophical context, contemporary constructivist scholars and pragmatic activists create an unnecessary and potentially dangerous political fog. The book carefully dissects various human rights models and ends with a defense of the Declaration's cosmopolitan vision against charges of unrealistic utopianism and Western ethnocentrism.

Inherent Human Rights takes exception to the reigning view that the Golden Rule is the best defense of human rights. Instead, it calls for us to "follow the lead of the Declaration's drafters and liberate the idea of human rights from the realm of the political and the juridical, which is where contemporary theorists have imprisoned it."

Lavranos: Judicial Review of UN Sanctions by the European Court of Justice

With its Kadi-judgment, the European Court of Justice firmly rejected the Kadi/Yusuf-judgments of the Court of First Instance. The Court of Justice made unambiguously clear that Community law, in particular its basic, core fundamental rights values prevail over any international law obligations of the EC and its Member States, including UN Security Council Resolutions and the UN Charter. As a consequence thereof, individuals targeted by UN sanctions must have access to full judicial review in order to be able to ensure the eff ective protection of their fundamental rights, including procedural rights as guaranteed by the European Convention of Human Rights (ECHR). As a result, the Court of Justice proved that the Community is indeed based on the rule of law and that the fi ght against terrorism - how important it may be - cannot be used as a justifi cation for completely abrogating European constitutional law values as guaranteed within the Community and its Member States.

Barcelo: Expanded Judicial Review of Awards After Hall Street and in Comparative Perspective

The International Law of Investment Claims considers the distinct principles governing the prosecution of a claim in investment treaty arbitration. The principles are codified as 54 ‘rules’ of general application on the juridical foundations of investment treaty arbitration, the jurisdiction of the tribunal, the admissibility of claims and the laws applicable to different aspects of the investment dispute. The commentary to each proposed rule contains a critical analysis of the investment treaty jurisprudence and makes extensive reference to the decisions of other international courts and tribunals, as well as to the relevant experience of municipal legal orders. Solutions are elaborated in respect of the most intractable problems that have arisen in the cases, including: the effect of an exclusive jurisdiction clause in an investment agreement with the host state; reliance on the MFN clause in relation to jurisdictional provisions; and, the legitimate scope of derivative claims by shareholders.

Capps: Human Dignity and the Foundations of International Law

International lawyers have often been interested in the link between their discipline and the foundational issues of jurisprudential method, but little that is systematic has been written on this subject. In this book, an attempt is made to fill this gap by focusing on issues of concept-formation in legal science in general with a view to their application to the specific concerns of international law.

In responding to these issues, the author argues that public international law seeks to establish and institutionalise a system of authoritative judgment whereby the conditions by which a community of states can co-exist and co-operate are ensured. A state, in turn, must be understood as ultimately deriving legitimacy from the pursuit of the human dignity of the community it governs, as well as the dignity of those human beings and states affected by its actions in international relations. This argument is in line with a long and now resurgent Kantian tradition in legal and political philosophy.