The Ethiopian Yearbook of International Law has issued a call for submissions for its inaugural volume. Here's the call:

The Ethiopian Yearbook of International Law (EtYIL) is a peer-reviewed academic journal that publishes scholarly works of the highest standard in the field of international law broadly defined, but with a focus on Ethiopia and the Horn of Africa region. The first edition of EtYIL is due for publication in 2016. All are invited to submit ideas, abstracts, and manuscripts by emailing the editorial team at ethiopianyearbook@gmail.com. For more information on the Yearbook and submission guidelines, click here.

The Yearbook of International Environmental Law has posted a call for submissions for volume 26 (2015) on the theme: "Addressing Climate Change in the Context of Sustainable Development Goals (SDGs)." Here's the call:

Addressing Climate Change in the Context of Sustainable Development Goals

The Editors of the Yearbook of International Environmental Law (YIEL) welcome submissions for Volume 26 (2015) on the theme: Addressing Climate Change in the Context of Sustainable Development Goals (SDGs).

Once again the world’s leaders gather in Paris (30 November to 11 December 2015) in a Conference of the Parties (COP) to the UN Framework Convention on Climate Change (UNFCCC) to address the consequences of our present lifestyle: greenhouse gas emissions (GHG) from human activities are now driving climate change at the highest levels in history with carbon dioxide emissions having risen by almost 50% (since 1990), average global temperature increasing (between 1880 to 2012) by 0.85°C and the global average sea level rising between 1901 to 2010. It is quite clear that the proposals offered to simply stall the degradation and mitigate its immediate effects go beyond the traditional solutions usually reflected in a ‘legal instrument’. The minimum measures required constitute a major interference with the economic and social structure of States and effectively the economic paradigm of our era.

A blueprint of such a massive intervention may be found in the Sustainable Development Goals (SDGs) adopted on 25 September 2015 in the UN Sustainable Development Summit (UNSDS) in New York. Essentially a sequel to the Millennium Development Goals (MDGs) adopted in 2000, the SDGs are to be realized in an incremental, persuasive and leisurely way in a 15-year cycle. They include challenges as diverse as inequality in living standards, sustainable cities, clean water and energy, women’s empowerment, quality education, healthy lives, poverty and hunger. Interestingly, Goal 13 specifically addresses mitigating threats of climate change through strengthening resilience to climate-related hazards; integrating climate change measures into national policies, and improving human and institutional capacity. Although, it is supplemented by the commitment undertaken by developed States parties to the UNFCCC to jointly mobilize $100 billion annually by 2020 from all sources to address the needs of developing countries in the context of meaningful mitigation actions, transparency on implementation and full operationalization of the Green Climate Fund through its capitalization, it is important to note that both developing and developed States undertake obligations relating to climate change.

It is in this context that the present call for papers invites contributions on climate change in the wider context of the SDGs with a view to enriching our knowledge-base and understanding of both the problems we may usefully address and the tentative and wide- ranging solutions offered in UNFCCC COP 21 and elsewhere. Papers may encompass empirical approaches, theoretical discussions and perspectives from practice.

Topics of interest for submission could include, but are not limited to:

3. Environmental Dimension of the SDGs

Submissions should be sent by 31st March 2016 to our Assistant Editor Stacy Belden (stacybelden@gmail.com).

Mikael Rask Madsen (Univ. of Copenhagen - Law) has posted an ESIL Reflection on The New Sociology of International Courts.
Posted by Jacob Katz Cogan at 6:02 AM

De Baere & Wouters: The Contribution of International and Supranational Courts to the Rule of Law 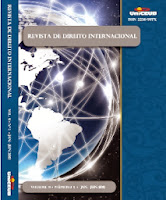 The latest issue of the Revista Latinoamericana de Derecho Internacional (no. 3, 2015) is out. Contents include:
Posted by Jacob Katz Cogan at 9:02 AM

New Issue: The Law and Practice of International Courts and Tribunals

The latest issue of The Law and Practice of International Courts and Tribunals (Vol. 14, no. 3, 2015) is out. Contents include:
Posted by Jacob Katz Cogan at 6:08 AM

Labels: Journals, The Law and Practice of International Courts and Tribunals

Hilpold: The Security Council and the Fight Against Terrorisms: Does SC Resolution 2249 (2015) Lead to a More Grotian or a More Kantian International Society?

Peter Hilpold (Univ. of Innsbruck - Law) has posted The Security Council and the Fight Against Terrorisms: Does SC Resolution 2249 (2015) Lead to a More Grotian or a More Kantian International Society? Here's the abstract:

SC Res. 2249 of 20 November 2015 was intended to open up a new chapter in the fight against terrorism in general and against ISIS in particular. However, in academia this Resolution was received with criticism and stupor. First attempts to interpret this Resolution ended up in inconclusiveness.

In this article, after an analysis of SC Resolution 2249, it will be shown that the criteria developed for assessing jus ad bellum in inter-state relations are of no easy application in the relationship between states and non-state actors and in particular in regard to terrorists. If the prohibition of the use of force applies at all in this field this has to happen in a largely modified way. Fears that a lowered threshold for the use of force against terrorists will introduce a new “Hobbesian” element in international law do not appear to be justified. On the contrary, it is argued here that a state community showing more solidarity in the fight against terrorism will reinforce their Kantian traits. Res. 2249 can offer an important contribution for such a development to take place.

Posted by Jacob Katz Cogan at 3:13 AM

Investment arbitrations should not happen too often, because they are costly processes for both parties. Yet they regularly happen. Why? We investigate the hypothesis that investment arbitrations are used as a means of last resort, after dissuasion has failed, and that dissuasion is most likely to fail in situations were significant political risk materializes. Investment arbitration should thus tend to target countries in which certain types of political risk has materialized. In order to test this hypothesis, we focus in this paper on two drivers of political risk: bad governance, and economic crises. We test various links between those two drivers of risk and arbitration claims. We use an original dataset that includes investment claims filed under the rules of all arbitration institutions as well as ad hoc arbitrations. We find that bad governance, understood as corruption and lack of rule of law (using the WGI Corruption and WGI Rule of Law indexes), has a statistically significant relation with investment arbitration claims, but economic crises do not.

Chehtman: Terrorism and the Conceptual Divide between International and Transnational Criminal Law

Whether terrorism should be conceptualized as a transnational or international crime is a deeply contested issue in contemporary international law. What is more interesting, the terms of the debate are made significantly more difficult by the fact that the adequate distinction between these categories is itself a matter of controversy. This paper provides an answer to this question by precisely clarifying the conceptual and normative fault lines between domestic, transnational and international criminal law. Accordingly, it first provides a conceptual analysis of these categories and suggests that the key distinction between them is jurisdictional, ie it concerns the scope of the right to punish them. On this basis, it examines where terrorism fits in these categories and why. Unsurprisingly, the article argues that terrorist acts do not fit in one category only. The paper distinguishes four “varieties” of terrorism which are conceptualized along two axes, ie, national and cross-border terrorism, and state terrorism and terrorism conducted by non-state groups. Ultimately, it concludes that while the majority of terrorist acts conducted by non-state groups belong to the province of transnational criminal law, the majority of those perpetrated by state authorities should be conceptualized as core crimes of international criminal law. But what is more important, the article proposes a substantive criterion to explain why any such act should belong in one category or the other.

The latest issue of the Revista Iberoamericana de Derecho Internacional y de la Integración (no. 3, December 2015) is out. Contents include:
Posted by Jacob Katz Cogan at 6:11 AM

The latest issue of Human Rights & International Legal Discourse (Vol. 9, no. 1, 2015) is out. Contents include:
Posted by Jacob Katz Cogan at 3:08 AM

The latest issue of the Journal of East Asia and International Law (Vol. 8, no. 2, Autumn 2015) is out. Contents include:
Posted by Jacob Katz Cogan at 12:06 AM

AJIL Unbound has posted a symposium on the "Immunity of State Officials from Foreign Criminal Jurisdiction and the International Law Commission’s Draft Articles." The symposium includes an introduction by Ingrid B. Wuerth and essays by William S. Dodge, Chimène I. Keitner, and Roger O'Keefe.
Posted by Jacob Katz Cogan at 8:40 AM

The latest issue of the Schweizerische Zeitschrift für internationales und europäisches Recht (Vol. 25, no. 2, 2015) is out. Contents include:
Posted by Jacob Katz Cogan at 3:05 PM

The latest issue of the Asian International Arbitration Journal (Vol. 11, no. 2, 2015) is out. Contents include:
Posted by Jacob Katz Cogan at 10:24 AM

The latest issue of the International Studies Quarterly (Vol. 59, no. 4, December 2015) is out. Contents include:
Posted by Jacob Katz Cogan at 12:33 PM