The latest issue of International Organization (Vol. 61, no. 3, July 2007) is out. Contents include: 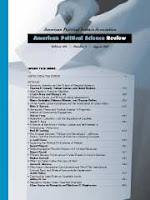 The latest issue of the American Political Science Review (Vol. 101, no. 3, August 2007) is out. Contents include:

The latest volume of the German Yearbook of International Law (Vol. 49, 2006) is out. Contents include:

This article, part of an interdisciplinary symposium on international delegation, analyzes grants of authority to international organizations (IOs) to monitor compliance with un-ratified treaties and non-binding norms and standards.

It begins with a historical review of the different ways in which officials and review bodies of the International Labor Organization (ILO) to monitor compliance with treaties and recommendations that the organization has adopted but that a member state has not ratified or otherwise accepted as legally binding. The ILO membership has repeatedly expanded these monitoring powers since the organization's founding in 1919. It has done so both informally (by allowing ILO officials to expand the scope of the initial delegation that established the organization) and formally (by amending the ILO constitution to codify and further enlarge these informal expansions of the organization's monitoring authority). Taken together, these developments challenge the conventional wisdom that the delegation of authority to the ILO involves only modest sovereignty costs.

The article then uses the ILO's history to emphasize the importance of delegations that authorize international bodies to monitor compliance with nonbinding international rules. Such delegations often arise and thrive outside of the formal channels of authority. This makes it essential for scholars to look beyond treaty texts and institutional design features to consider how power is actually exercised within IOs and how the costs and benefits of international delegations change over time. Finally, the article considers what insights the ILO offers for delegations to other IOs. It argues that monitoring compliance with unconsented-to legal rules is an alternative institutional response to a problem that many IOs confront: how to ensure that all states affected by a cooperation problem participate in the resolution of that problem rather than free riding on the efforts of other countries.

Schulz: The Phenomenon of Torture

Torture is the most widespread human rights crime in the modern world, practiced in more than one hundred countries, including the United States. How could something so brutal, almost unthinkable, be so prevalent? The Phenomenon of Torture: Readings and Commentary is designed to answer that question and many others. Beginning with a sweeping view of torture in Western history, the book examines questions such as these: Can anyone be turned into a torturer? What exactly is the psychological relationship between a torturer and his victim? Are certain societies more prone to use torture? Are there any circumstances under which torture is justified - to procure critical information in order to save innocent lives, for example? How can torture be stopped or at least its incidence be reduced?

Edited and with an introduction by the former Executive Director of Amnesty International USA, The Phenomenon of Torture draws on the writings of torture victims themselves, such as the Argentinian journalist Jacobo Timerman, as well as leading scholars like Elaine Scarry, author of The Body in Pain. It includes classical works by Voltaire, Jeremy Bentham, Hannah Arendt, and Stanley Milgram, as well as recent works by historian Adam Hochschild and psychotherapist Joan Golston. And it addresses new developments in efforts to combat torture, such as the designation of rape as a war crime and the use of the doctrine of universal jurisdiction to prosecute perpetrators. Designed for the student and scholar alike, it is, in sum, an anthology of the best and most insightful writing about this most curious and common form of abuse. Juan E. Méndez, Special Advisor to the United Nations Secretary General on the Prevention of Genocide and himself a victim of torture, provides a foreword.

More papers from the Symposium "Public International Law and Economics," forthcoming in the University of Illinois Law Review, have been posted. (For papers previously posted see here, here, and here.) These include:

This paper presents a rationalist approach to treaty formation and adherence, where nations are motivated by their self-interest in a strategic framework that accounts for other nations' responses. Key considerations include coordination games, dynamic cooperation, institutional design, and the aggregation technology of public supply. Dynamic aspects involve multilateral cooperation under a variety of game forms. Treaty design is essential in motivating nations to fulfill obligations without the need for enforcement. Some properties of public goods - e.g., the manner in which individual contributions determine the available consumption level (i.e., the aggregation technology) - have a crucial influence over nations' incentives to adhere to treaties once ratified. The role of morality and conformity are captured in the strategic framework presented.

The analysis of this paper extends the interesting work of Goldsmith and Posner which have rejected the standard "explanations of customary international law (CIL) based on opinio juris, legality, morality, and related concepts." They have, instead, taken a positivist, rationalist viewpoint of CIL in which unitary actors, representing countries, are driven by self-interests and strategic considerations. Goldsmith and Posner's study accounts for game-theoretical interactions among states, whereby an agent adjusts for how its counterparts will react to the agent's actions. Carrying on in this tradition, the current paper indicates that treaties can be designed to be self-enforcing depending on the incentives captured by the treaty wording. The presence of strategic players need not lead to a pessimistic result For example, the Montreal Protocol on Ozone Depleting Substances resulted in a treaty where adherence has been excellent and there has been little need for enforcement at the country level. Throughout the paper, we present a host of different games that include two and many players, single and repeated plays, and a host of game forms. In particular, we do not just focus on the Prisoner's Dilemma.

Simon Evenett (University of St. Gallen - Economics), What Can Be Learned from the Game-Theoretic Analyses of Treaties? A Comment on Professor Sandler's Contribution. Here's the abstract:

In recent years a number of prominent legal scholars have joined a longer-standing tradition among economists in analysing treaties using a positivist and rationalist approach, often invoking game theoretic tools. This paper seeks to assess the boundaries of this research programme, identifying not only questions that this scholarship seeks to answer, but also those it overlooks. It is argued that some of the latter could profitably be examined using the same methodology and a number of suggestions are made in this respect. Perhaps more critically it is argued that certain key features of treaties, such as their very codification in the first place, cannot be explained by appeals to standard models of repeated games and that further refinements are necessary. It is hoped that this note will be of interest to consumers and as well as producers of the literature on treaties and other codified international agreements.

In his article on "Treaties: Strategic Considerations" Todd Sandler analyses the conditions facilitating or impeding international cooperation. These conditions are determined by the strategic constellation of potential signatories of treaties. The strategic constellation, in turn, depends on a whole range of properties of the situation in question. Sandler shows the effects of some variation with respect to these properties, but does not treat them systematically. As an extension to Sandler I deal with a number of such properties more explicitly. I chose four basic properties which play a role in almost any situation of international treaty formation: (1) costs and benefits of the pursued public good for the interested countries, (2) demand-side properties of the public goods, (3) supply side properties, i.e. their aggregation technology, and (4) the homo- and heterogeneity of the concerned countries. The paper shows some systematic effects of the variation of such properties.

Over the past forty-five years, bilateral investment treaties (BITs) have become the most important international legal mechanism for the encouragement and governance of foreign direct investment. Their proliferation over the past two decades in particular has been phenomenal. These intergovernmental treaties typically grant extensive rights to foreign investors, including protection of contractual rights and the right to international arbitration in the event of an investment dispute. How can we explain the diffusion of BITs? We argue that the spread of BITs is driven by international competition among potential host countries - typically developing countries - for foreign direct investment. We design and test three different measures of economic competition. We also look for indirect evidence of competitive pressures on the host to sign BITs. The evidence suggests that potential hosts are more likely to sign BITs when their competitors have done so. We find some evidence that coercion and learning play a role, but less support for cultural explanations based on emulation. Our main finding is that diffusion in this case is associated with competitive economic pressures among developing countries to capture a share of foreign investment. We are agnostic at this point about the benefits of this competition for development.

Posted by Jacob Katz Cogan at 8:55 AM

Graeme B. Dinwoodie (Chicago-Kent College of Law) has posted Copyright Lawmaking Authority: An (Inter)Nationalist Perspective on the Treaty Clause (Columbia Journal of Law & the Arts, forthcoming). Here's the abstract:

Posted by Jacob Katz Cogan at 8:39 AM

I'll be on vacation for the next two weeks, and so there will be very light posting until I return.
Posted by Jacob Katz Cogan at 12:31 AM

The latest issue of the International Organizations Law Review (Vol. 3, no. 2, 2006) is out. Contents include: