Conforti, Vezzani, & Zagrebelsky on the ECHR

Recently, the Italian Society of International Law posted three essays on the European Convention on Human Rights. They are:
Posted by Jacob Katz Cogan at 5:46 PM

Fassbender & Peters: The Oxford Handbook of the History of International Law

The latest volume of the Hague Yearbook of International Law (Vol. 24, 2011) is out. Contents include:
Posted by Jacob Katz Cogan at 12:34 PM 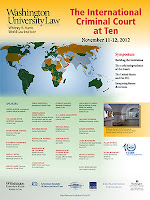 On November 11-12, 2012, the Whitney R. Harris World Law Institute at Washington University in St. Louis School of Law will host a conference on "The International Criminal Court at Ten." The program is here. Here's the idea:

The Whitney R. Harris World Law Institute will host a major international conference on November 11-12, 2012 to commemorate the tenth anniversary of the International Criminal Court (ICC). This international gathering follows immediately on the heels of the 2012 U.S. presidential election, and will precede the 11th session of the ICC ASP in The Hague, making it both timely and important.

The conference will begin with a day of remembrance honoring the victims of atrocity crimes and the memory of Whitney R. Harris in celebration of his 100th Birthday and will be followed by a symposium focused on the International Criminal Court's achievements and challenges to date, early jurisprudence and future directions of the Court, and discuss the U.S. position towards the Court.

This SHARES Seminar will provide a critical review of the principles of international responsibility, as these have been formulated by the International Law Commission (ILC), from the perspective of shared responsibility.

However, the ILC has provided little guidance regarding the allocation of responsibility or reparation in such cases. In such diverse areas as peacekeeping, counter-terrorism policy, refugee law and international environmental law, considerable uncertainty exists on the applicable principles of responsibility in situations when two or more actors contribute to a wrong.

Bodansky & Rajamani: The Evolution and Governance Architecture of the Climate Change Regime

This book chapter provides an historical and legal introduction to the UN climate change regime. It reviews the development of the regime, from the emergence of the climate change issue in the 1980s through the adoption of the 1992 UN Framework on Climate Change, the 1997 Kyoto Protocol, the 2001 Marrakech Accords, the 2007 Bali Action Plan, the 2009 Copenhagen Accord, the 2010 Cancun Agreements, and the 2011 Durban Platform. The chapter outlines the principal elements of the legal regime, and concludes with some brief observations about the future direction of the UN climate change regime.

Posted by Jacob Katz Cogan at 4:47 AM

Heller: "One Hell of a Killing Machine": Signature Strikes and International Law

The vast majority of drone attacks conducted by the U.S. have been signature strikes – strikes that target “groups of men who bear certain signatures, or defining characteristics associated with terrorist activity, but whose identities aren’t known.” In 2010, for example, Reuters reported that of the 500 “militants” killed by drones between 2008 and 2010, only 8% were the kind “top-tier militant targets” or “mid-to-high-level organizers” whose identities could have been known prior to being killed. Similarly, in 2011, a U.S. official revealed that the U.S. had killed “twice as many ‘wanted terrorists’ in signature strikes than in personality strikes.”

Despite the U.S.’s intense reliance on signature strikes, scholars have paid almost no attention to their legality under international law. This article attempts to fill that lacuna. Section I explains why a signature strike must be justified under either international humanitarian law (IHL) or international human rights law (IHRL) even if the strike was a legitimate act of self-defence under Article 51 of the UN Charter. Section II explores the legality of signature strikes under IHL. It concludes that although some signature strikes clearly comply with the principle of distinction, others either violate that principle as a matter of law or require evidence concerning the target that the U.S. is unlikely to have prior to the attack. Section III then provides a similar analysis for IHRL, concluding that most of the signature strikes permitted by IHL – though certainly not all – would violate IHRL’s insistence that individuals cannot be arbitrarily deprived of their right to life.

Bodansky: The Who, What, and Wherefore of Geoengineering Governance

Daniel Bodansky (Arizona State Univ. - Law) has posted The Who, What, and Wherefore of Geoengineering Governance. Here's the abstract:

The potential of geoengineering to reverse global warming rapidly and cheaply makes it alluring to groups across the political spectrum. But geoengineering also poses significant risks and raises the specter of technology gone awry. This article analyzes the basic governance issues raised by geoengineering, including the possible functions, forms, objects and agents of governance. It then explores these issues by focusing on four scenarios of particular concern: inadequate research funding, premature rejection, unilateral individual action, and unilateral state action.

Posted by Jacob Katz Cogan at 4:49 AM

The latest issue of Merkourios: Utrecht Journal of International and European Law (Vol. 28, no. 75, 2012) is out. Contents include:
Posted by Jacob Katz Cogan at 1:01 PM

National Human Rights Institutions (NHRIs) – human rights commissions and ombudsmen – have gained recognition as a possible missing link in the transmission and implementation of international human rights norms at the domestic level. They are also increasingly accepted as important participants in global and regional forums where international norms are produced. By collecting innovative work from experts spanning international law, political science, sociology and human rights practice, this book critically examines the significance of this relatively new class of organizations. It focuses, in particular, on the prospects of these institutions to effectuate state compliance and social change. Consideration is given to the role of NHRIs in delegitimizing – though sometimes legitimizing – governments' poor human rights records and in mobilizing – though sometimes demobilizing – civil society actors. The volume underscores the broader implications of such cross-cutting research for scholarship and practice in the fields of human rights and global affairs in general.

The latest issue of Human Rights & International Legal Discourse (Vol. 6, no. 2, 2012) is out. Contents include:
Posted by Jacob Katz Cogan at 6:21 AM

Call for Papers: Inter-Institutional Relations in Global Law and Governance

A call for papers has been issued for the 9th Global Administrative Law Seminar, to take place in Viterbo, June 13-14, 2013. The seminar's theme is "Inter-Institutional Relations in Global Law and Governance." The call is here.
Posted by Jacob Katz Cogan at 4:45 AM

Roundtable: Humanitarian Crises and International Law: The Responsibility to Protect and Prosecute

On November 23, the University of Leeds School of Law will host a roundtable on "Humanitarian Crises and International Law: The Responsibility to Protect and Prosecute." The program is here. Here's the idea:

This roundtable discussion brings together scholars from law, politics and criminology to explore the challenges posed by ‘non-sovereign spaces’ to the international community, and for its agenda of protecting civilians, preventing human rights violations, and promoting security and justice in such spaces with de facto regimes. Professor William Schabas (Middlesex) will lead the discussion and will be seconded by renowned experts and scholars in the field.

With humanitarian crises mounting over the past two decades, the international community has shouldered a double responsibility: to protect civilians and victims, and to prosecute perpetrators of gross human rights violations and mass atrocity crimes. Contemporary humanitarian crises emerge where states and governments fail to protect their citizens, or worse, become and join perpetrators of human rights violations on a massive scale.

Both interventions to protect, and to prosecute are often situated in ‘non-sovereign spaces’, where mass violence is embedded in trajectories of long-term conflict. In this context questions arise as to the relationship between security and justice, between international law and international politics, and between different forms of intervention.

What is the responsibility of the international community in relation to de facto regimes, and what are the obligations of third states? How can violations of international human rights laws be prevented and prosecuted in such spaces? When is it legitimate to intervene where the consent of a State is lacking?

The latest volume of the Italian Yearbook of International Law (Vol. 21, 2011) is out. Contents include:
Posted by Jacob Katz Cogan at 12:33 PM

The latest issue of the International & Comparative Law Quarterly (Vol. 61, no. 4, October 2012) is out. Contents include:
Posted by Jacob Katz Cogan at 9:36 AM

Posted by Jacob Katz Cogan at 6:24 AM

Noll: Analogy at War: Proportionality, Equality and the Law of Targeting

This text is an inquiry into how the international community is understood in and through international law. My prism for this inquiry shall be the principle of proportionality in international humanitarian law, relating expected civilian losses to anticipated military advantage. To properly understand proportionality, I have to revert to the structure of analogical thinking in the thomistic tradition. Proportionality presupposes a third element to which civilian losses and military advantage can be related. In a first reading, I develop how this tradition of thought might explain the difficulties contemporary IHL doctrine has in understanding proportionality. If military commanders misconceive the third element as the sovereignty of their own state, they will invariably apply the proportionality principle in a paternalistic manner. This would obviate the most rudimentary idea of equality among states and do away with the common of an international community. In a second reading, I shall explore whether this third element could instead be thought of as a demos, while retaining the existing framework of analogical thinking. My argument is that this secularizing replacement is possible. Practically, its consequence would be a radical change in the task of the responsible military commander determining proportionality. That commander would now need to rethink civilians endangered by an attack as a demos whose potentiality must be preserved.