Today and tomorrow, October 28-29, 2017, the Centre for International Law Research and Policy and the International Nuremberg Principles Academy will hold a conference on "Power in International Criminal Justice: Towards a Sociology of International Justice," in Florence. The program is here.
Posted by Jacob Katz Cogan at 2:03 AM

Ethics & International Affairs has issued a call for submissions for its upcoming issues. Here's the call:

Ethics & International Affairs, the quarterly peer-reviewed publication of the Carnegie Council, is pleased to invite submissions for upcoming issues.

The journal bridges the gap between theory and practice by featuring articles, essays, and book reviews that integrate rigorous thinking about principles of ethics and justice into discussions of practical issues related to current policy developments, global institutional arrangements, and the conduct of important international actors.

In 2018, the editors are particularly interested in articles for peer review that address the following broad topics:

Issues of gender, women, and children, including feminist ethics, gender and development, women and children’s rights, and women and war.

Global health, including the right to health, health governance, health and climate change, and health equity.

We welcome both individual papers and proposals for special sections and symposia. We accept submissions on a rolling basis and strive to complete our rigorous peer review process within three months.

The course of study for the Hague Academy of International Law's 2018 Summer Program is now available. Registration will open on November 1. Here are the courses:

Posted by Jacob Katz Cogan at 4:10 AM

Gaillard & Bermann: Guide on the Convention on the Recognition and Enforcement of Foreign Arbitral Awards, New York, 1958

The Guide gives clear expression to the principal finding of extensive research, namely, that the Contracting States have interpreted and applied the New York Convention in an overwhelmingly consistent manner and that courts have diverged from the general trends in the case law in only isolated instances. As such, the Convention continues to fulfill its purpose of facilitating the worldwide recognition and enforcement of arbitral awards to the greatest extent possible.

Posted by Jacob Katz Cogan at 2:29 AM

Today and tomorrow, October 27-28, 2017, the African Society of International Law will hold its sixth annual conference, in Dar es Salaam. The theme is: "International Law and Natural Resources in Africa."
Posted by Jacob Katz Cogan at 12:01 AM

International organizations have been with us for a long time. They are now cardinal actors in international life, law and politics, a critical role which was probably not fully anticipated at their inception in the mid-nineteenth century.

Posted by Jacob Katz Cogan at 9:01 AM

In this bold and persuasive work Daniel Gervais, one of the world’s leading thinkers on the subject of intellectual property, argues that the international copyright system is in need of a root and branch rethink. As the Internet alters the world in which copyright operates beyond all recognition, a world increasingly defined by the might of online intermediaries and spawning a generation who are simultaneously authors, users and re-users of creative works, the structure of copyright in its current form is inadequate and unfit for purpose. This ambitious and far-reaching book sets out to diagnose in some detail the problems faced by copyright, before eloquently mapping out a path for comprehensive and structured reform. It contributes a reasoned and novel voice to a debate that is all too often driven by ignorance and partisan self-interest.

Posted by Jacob Katz Cogan at 5:03 AM

Hulsebosch & Golove: 'The Known Opinion of the Impartial World': Foreign Relations and the Law of Nations in the Federalist

Conventional accounts of The Federalist tend to overlook a critical and uncontroversial fact about the Constitution: the principal function it assigned the proposed new government was the conduct of the Union’s foreign affairs. By neglecting this simple point, readers too often are led to miss the forest for the trees. The Federalist’s central task was not to offer a general blueprint for republican government but, rather, to demonstrate the depth of the Confederation’s failures in foreign affairs and to explain why the new federal government would both govern more effectively in that realm and not imperil the republican commitments of the Revolution. This insight, in turn, reveals another: Even when The Federalist focuses on themes that seem far removed from the problem of foreign affairs — whether in analyzing the general principles of federalism or the separation of powers, the importance of energy in the executive or independence in the judiciary, or the deficiencies of popular assemblies — foreign affairs remains its ultimate subject. It was while developing a theory adequate to explain the interrelation between domestic and foreign governance that the authors of The Federalist were led to their deepest insights. Borrowing from Scottish Enlightenment ideas — which they filtered through their political experiences under the Confederation — they rooted their argument in theories of human nature and the social psychology of governance, which they then applied not only to diagnose the causes of the Confederation’s failings but also to explain the institutional arrangements that could overcome them. The result was an account of how the new federal government would be able to limit the influence of the destructive passions over the making of foreign policy and thereby take advantage of the bounded possibilities of peaceable, productive international relations. 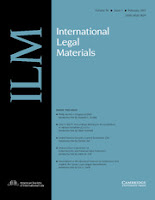 The latest volume of the Italian Yearbook of International Law (Vol. 26, 2016) is out. Contents include:
Posted by Jacob Katz Cogan at 10:56 AM

Heller: Specially-Affected States and the Formation of Custom

Kevin Jon Heller (Univ. of Amsterdam - Law) has posted Specially-Affected States and the Formation of Custom. Here's the abstract:

Although the US has consistently relied on the ICJ’s doctrine of specially-affected states to claim that it and other powerful states in the Global North play a privileged role in the formation of customary international law, the doctrine itself has been almost completely ignored both by legal scholars and by the ICJ itself. This article attempts to fill that lacuna. In particular, by focusing on debates in a variety of areas of international law – with particular emphasis on the jus ad bellum and jus in bello – it addresses two questions: (1) what makes a state “specially affected”? and (2) what exactly is the importance of a state qualifying as “specially affected” for the formation of custom? The article concludes not only that the US approach to the doctrine of specially-affected states is fatally flawed, but also that a more theoretically coherent understanding of the doctrine would give states in the Global South power over custom formation that the US and other Global North states would never find acceptable.

Posted by Jacob Katz Cogan at 9:07 AM

The latest issue of Transnational Environmental Law (Vol. 6, no. 3, November 2017) is out. Contents include:
Posted by Jacob Katz Cogan at 12:03 AM

The latest issue of the Revista Costarricense de Derecho Internacional (No. 6, 2017) is out. Contents include:
Posted by Jacob Katz Cogan at 9:58 PM

The latest issue of the Journal of International Criminal Justice (Vol. 15, no. 4, September 2017) is out. Contents include:
Posted by Jacob Katz Cogan at 4:59 PM

Leicester Law School has issued a call for abstracts for early career researchers for a workshop on the "Neglected Methodologies of International Law – Empirical, Socio-Legal and Comparative," to take place January 31, 2018. The call is here.
Posted by Jacob Katz Cogan at 12:04 AM