The United Nations Conference on Trade and Development and the Universidad Autónoma de Madrid have issued a call for papers for a conference on "UNCTAD’s Principles on Responsible Sovereign Borrowing and Lending." The call can be found here. Here's the idea:

The causes and widespread negative effects of the global financial and economic crisis prompted UNCTAD to launch an initiative in 2009 to promote responsible sovereign lending and borrowing practices. The purpose of UNCTAD's initiative is to provide a forum for debate on responsible practices and to develop a set of commonly accepted principles and practices relating to sovereign financing.

An expert group was established to contribute to the process of drafting these Principles. The group is composed of world renowned legal and economic experts, private investors and NGOs. Senior representatives from the IMF, the World Bank and Paris Club participate as observers of this group. After several formal meetings and exchanges of ideas a draft of the Principles emerged. This document is available in Arabic, Chinese, English, French, Russian and Spanish here.

As this draft is intended to be a point of departure for international discourse and will be subject to further discussions with governments, UNCTAD and the UAM (through its schools of Law and Economics, with the support of the project DER2009-11436 on ‘global legal goods’) will organize a conference to discuss in depth the foundations, implications and perspectives of these Principles and the problems they are designed to address.

Since sovereign lending and borrowing require an interdisciplinary and pluralist approach, the conference will encourage discussion among scholars and experts from different disciplines and backgrounds, focusing on economic, financial, institutional and legal issues. The UNCTAD’s initiative being novel in several ways, original and innovative research is especially encouraged.

The conference will take place in the campus of the UAM in 2 March 2012. The preliminary program will be available online as soon as the first selection of papers has been processed. Papers selected will be published in a collective book, one edition in English and another one in Spanish.

This carefully regarded and well-structured handbook covers the broad range of norms, practices, policies, processes and institutional mechanisms of international criminal law, exploring how they operate and continue to develop in a variety of contexts. Leading scholars in the field and experienced practitioners have brought together their expertise and perspectives in a clear and concise fashion to create an authoritative resource, which will be useful and accessible even to those without legal training. 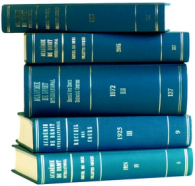 Volumes 338 and 343 of the Recueil des Cours, Collected Courses of the Hague Academy of International Law are out. Contents include:
Posted by Jacob Katz Cogan at 12:19 AM

Steinberg: Assessing the Legacy of the ICTY

Richard H. Steinberg (Univ. of California, Los Angeles - Law) has published Assessing the Legacy of the ICTY (Martinus Nijhoff Publishers 2011). The table of contents is here. Here's the abstract:

This collection of essays assesses the legacy established by the most important international criminal tribunal since the Nuremberg and Tokyo war crimes trials, and considers what might be done to enhance or modify the legacy of the International Criminal Tribunal for the former Yugoslavia (ICTY), including improvement of the capacity of state courts in the region to prosecute violations of humanitarian law by using the Tribunal’s documents, evidence, law, and practice.

International Investment Law (IIL) is a highly specialized discipline, but does not exist in a legal vacuum. It is created, applied and interpreted in a context of general, legal concepts, including the law of treaties, State responsibility, diplomatic protection and State immunity. The contributions to this volume assess the interrelation between IIL and these areas of general international law. They provide evidence of IIL ‘opting out’ of the general framework, but also of integration and cross-fertilisation. Taken together, they illustrate the varied interactions between general international law and one of its most dynamic sub-areas.

Posted by Jacob Katz Cogan at 4:39 AM

The latest issue of the Journal of International Peacekeeping (Vol. 15, nos. 3-4, September 2011) is out. Contents include:
Posted by Jacob Katz Cogan at 2:48 PM

Kröll et al.: The United Nations Convention on Contracts for the International Sale of Goods: Article by Article Commentary

Thirty years after the approval on the 19th April 1980, the United Nations Convention on Contracts for the International Sale of Goods, the CISG, has become the law of international sales. In the meantime 76 states have ratified the CISG which make up for more than two thirds of the global trade. Despite CISG's practical importance and its global reach the commentary literature on the CISG in English, the language of international trade, is rather limited. This book is intended to fill this gap and to supplement the few existing commentaries by a truly international work which takes into account the various legal settings in which the CISG is applied. The Commentary is designed as a German type of commentary which provides an authoritative "Article-by-Article" comment to the CISG. Its structure strictly follows the structure of the provisions of the Convention. Specific topics, e.g. E-Commerce and the CISG, comparative contract texts such as Unidroit Principles of International Commercial Contracts, European Principles of Contract Law and Draft Common Frame of Reference, are dealt with in the context of the comments of the pertinent articles. The Incoterms are also dealt with in detail.

The latest issue of the Review of International Organizations (Vol. 6, no. 2, July 2011) is out. Contents include:
Posted by Jacob Katz Cogan at 9:36 AM

The latest issue of the European Journal of International Relations (Vol. 17, no. 2, June 2011) is out. Contents include:
Posted by Jacob Katz Cogan at 12:18 AM

The latest issue of the Review of International Organizations (Vol. 6, no. 1, March 2011) is out. Contents include:
Posted by Jacob Katz Cogan at 11:06 AM

Koskenniemi: The Politics of International Law

Today international law is everywhere. Wars are fought and opposed in its name. It is invoked to claim rights and to challenge them, to indict or support political leaders, to distribute resources and to expand or limit the powers of domestic and international institutions. International law is part of the way political (and economic) power is used, critiqued, and sometimes limited. Despite its claim for neutrality and impartiality, it is implicit in what is just, as well as what is unjust in the world. To understand its operation requires shedding its ideological spell and examining it with a cold eye. Who are its winners, and who are its losers? How - if at all - can it be used to make a better or a less unjust world?

Heller: The Nuremberg Military Tribunals and the Origins of International Criminal Law

This book provides the first comprehensive legal analysis of the twelve war crimes trials held in the American zone of occupation between 1946 and 1949, collectively known as the Nuremberg Military Tribunals (NMTs). The judgments the NMTs produced have played a critical role in the development of international criminal law, particularly in terms of how courts currently understand war crimes, crimes against humanity, and the crime of aggression. The trials are also of tremendous historical importance, because they provide a far more comprehensive picture of Nazi atrocities than their more famous predecessor, the International Military Tribunal at Nuremberg (IMT). The IMT focused exclusively on the 'major war criminals'-the Goerings, the Hesses, the Speers. The NMTs, by contrast, prosecuted doctors, lawyers, judges, industrialists, bankers-the private citizens and lower-level functionaries whose willingness to take part in the destruction of millions of innocents manifested what Hannah Arendt famously called 'the banality of evil'.

The book is divided into five sections. The first section traces the evolution of the twelve NMT trials. The second section discusses the law, procedure, and rules of evidence applied by the tribunals, with a focus on the important differences between Law No. 10 and the Nuremberg Charter. The third section, the heart of the book, provides a systematic analysis of the tribunals' jurisprudence. It covers Law No. 10's core crimes-crimes against peace, war crimes, and crimes against humanity-as well as the crimes of conspiracy and membership in a criminal organization. The fourth section then examines the modes of participation and defenses that the tribunals recognized. The final section deals with sentencing, the aftermath of the trials, and their historical legacy.

Jain: The Control Theory of Perpetration in International Criminal Law