Lovric: Deference to the Legislature in WTO Challenges to Legislation

Daniel Lovric has published Deference to the Legislature in WTO Challenges to Legislation (Kluwer Law International 2009). Here's the abstract:

Challenges to domestic legislation before international tribunals are a growing phenomenon in public international law. Consequently, in the field of global trade, the degree of deference given by WTO tribunals to domestic legislatures in challenges to their legislation is an area of increasing importance to practitioners, government officials and academics.

This timely work takes a new perspective on the way domestic law is treated at the international level. Using techniques of domestic constitutional law, it examines how international tribunals have treated challenges to legislation. The particular focus is WTO tribunals, but the book also draws on experiences from other international adjudicators, such as the European Court of Human Rights. Drawing from these examples, the author examines how international tribunals have (or have not) deferred to the opinions of the domestic legislature, and the legal techniques they've used in doing so. The treatment is detailed and comprehensive, contrasting and summarizing the relevant WTO case law.

Hobér, Magnusson, & Öhrström: Between East and West: Essays in Honour of Ulf Franke

Kaj Hobér, Annette Magnusson & Marie Öhrström have published Between East and West: Essays in Honour of Ulf Franke (Juris Publishing 2010). The table of contents is available here.
Posted by Jacob Katz Cogan at 6:38 AM

Jutta Brunnée (Univ. of Toronto - Law) will give a talk today at the University of Georgia School of Law International Law Colloquium Series on "An Interactional Theory of International Legal Obligation."
Posted by Jacob Katz Cogan at 12:06 AM

Call for Submissions: Eyes on the ICC

Eyes on the ICC has issued a call for submissions for its forthcoming volume. Here's the call:

Eyes on the ICC is the first peer-reviewed interdisciplinary journal dedicated exclusively to the work of the International Criminal Court and international criminal law.

The journal, published annually by the Council for American Students in International Negotiations, invites quality submissions for its 7th volume from practitioners, scholars, jurists, and professionals in fields related to international criminal law and policy. Occasionally, exceptional student work will be accepted. Manuscripts are accepted on a rolling basis until July 15, 2010.

Manuscripts must be computer-generated and submitted electronically via e-mail to the Managing Editor, Ms. Yasmin Tabi at yasmin@americanstudents.us, or via Berkeley Electronic Press’s ExpressO submission service, at http://law.bepress.com/expresso.

Each submission should contain an abstract, the author’s CV, appropriate contact information and a cover letter to the editor assuring that the manuscript has not been submitted or published elsewhere. Articles and Notes may range in length from 25 to 80 pages, double-spaced, and book reviews from 1,000 to 2,500 words. Submissions should adhere closely to the Chicago Manual of Style and cite sources in legal format according to the Harvard Blue Book.

Authors are encouraged to seek comments on their manuscripts from colleagues within their discipline. The journal invites commentary on the quality of its submissions, whether by private correspondence or published letter.

Correspondence not directly related to the submission process should be addressed to the Editor-in-Chief, Mr. Bernhard Kuschnik at bernhard@americanstudents.us.

Violations of international law and human rights laws are the plague of the twentieth and twenty-first centuries. People's inhumanity to people escalates as wars proliferate and respect for human rights and the laws of war diminish. In Decoding International Law: Semiotics and the Humanities, Professor Susan Tiefenbrun analyzes international law as represented artfully in the humanities.

Mass violence and flagrant violations of human rights have a dramatic effect that naturally appeals to writers, film makers, artists, philosophers, historians, and legal scholars who represent these horrors indirectly through various media and in coded language. This reader-friendly book enables us to comprehend and decode international law and human rights laws by interpreting meanings concealed in great works of art, literature, film and the humanities. Here, the author adopts an interdisciplinary method of interpretation based on the science of signs, linguistics, stylistics, and an in-depth analysis of the work's cultural context. This book unravels the complexities of such controversial issues as terrorism, civil disobedience, women's and children's human rights, and the piracy of intellectual property.

The paper aims at defragmenting the debate on amnesties by decomposing the various levels at which it is discussed. First of all it looks at amnesties as perceived in various areas of international law, specifically human rights law and international humanitarian law. It then looks at how different international criminal tribunals have dealt with the question of amnesties. It then considers vertical fragmentation (national courts vs International courts) and pluridisciplinary fragmentation (perceptions from law, sociology, philosophy and political science). In a final section, the article proposes to see what are the relevant aspects of the debate specifically for international tribunals and suggests that we should move away from issues of legality to consider issues of recognition, which make the debate far more easy to solve.

The latest volume of the Yearbook of International Humanitarian Law (Vol. 11, 2008) is out. Contents include:

The British Institute of International and Comparative Law will host the Fourteenth Investment Treaty Forum Public Conference on May 7, 2010. The theme is: "Do not pass Go: Jurisdictional and other objections available to respondent State." The program is not yet available. Here's the idea:

The aim of this ITF Public Conference is to review and analyse important developments in recent cases on jurisdiction by investment treaty tribunals. These developments include illegality (Fraport), fraud (El Salvador) and other instances of an investor's misconduct. Other topics for consideration will also include piercing the corporate veil (TSA Spectrum), unmeritorious and abusive claims (Phoenix), restrictive dispute resolution provisions (old China and Soviet BITs e.g. Tza Yap Shum and Renta 4) and the ongoing debate about what type of investments should not benefit from treaty protection. The speakers will discuss how and why these restrictions have affected the jurisdiction of tribunals.

Ohlin: A Meta-Theory of International Criminal Procedure: Vindicating the Rule of Law

On May 19-20, 2010, the British Institute of International and Comparative Law will host its tenth annual WTO conference. The program is available here. Here's the idea:

This will be the Tenth Annual WTO Conference and an apt time to consider past developments and predict future directions in WTO law. This annually held Conference is aimed at discussing topical issues and new developments in the WTO case law as well as putting them into the broader international legal and economic context. The objective of the conference is to analyse the impact of latest developments and look to potential future changes. The speakers are a mix of experienced WTO practitioners including leading lawyers, academics and WTO judges and officials.

The latest issue of Global Governance: A Review of Multilateralism and International Institutions (Vol 16, no. 2, April-June 2010) is out. Contents include:

Posted by Jacob Katz Cogan at 6:43 AM

The latest issue of the Journal of International Law and International Relations (Vol. 5, no. 2, Summer 2009) is out. This is a special issue on "Borders and Boundaries: Secession in the 21st Century." Contents include:

Posted by Jacob Katz Cogan at 9:56 AM

The latest issue of the Journal of the History of International Law / Revue d'histoire du droit international (Vol. 12, no. 1, 2010) is out. Contents include: 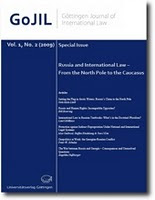 The latest issue of the Goettingen Journal of International Law (Vol. 2, no. 1, 2010) is out. Contents include:

International human rights adjudicators, while facing urgent cases, have used provisional measures in order to prevent irreparable harm, e.g. to order States to halt an expulsion, the execution of a death sentence, destruction of the natural habitat, or to ensure access to health care in detention or protection against death threats.

The practices of the international adjudicators made accessible in this book may prove useful in the ongoing cross-fertilization occurring among these adjudicators. Moreover, the analysis provided allows individual victims, their counsel, NGOs as well as international institutions to address more effectively urgent human rights cases.

The latest volume of the Chinese (Taiwan) Yearbook of International Law and Affairs (Vol. 25, 2007) is out. Contents include:

As noted previously, the Washington and Lee University School of Law and the United Nations Conference on Trade and Development are sponsoring a Joint Symposium on "International Investment and ADR: Preventing and Managing Investment Treaty Conflict" today in Lexington, Virginia. For those unable to attend, the live conference proceedings will be streamed, and remote participation is possible through Twitter (#wluadr) and Facebook. On the conference website, there are rapporteur reports (prepared by W&L students) that summarize the pre-conference brainstorming discussions.
Posted by Jacob Katz Cogan at 6:32 AM

Eric Posner (Univ. of Chicago - Law) will give a talk today at the Duke University School of Law Global Law Workshop on "Foreign Affairs Legalism: A Critique."
Posted by Jacob Katz Cogan at 12:18 AM

Romaniuk: Multilateral Counter-Terrorism: The Global Politics of Cooperation and Contestation

Contemporary terrorism is a global phenomenon requiring a globalized response. In this book Peter Romaniuk aims to assess to what extent states seek multilateral responses to the threats they face from terrorists. Providing a concise history and a clear discussion of current patterns of counter-terrorist co-operation, this book: analyses a wide spectrum of institutions from the United Nations and its various bodies to military, intelligence and law enforcement agencies; explains the full range of cooperative counter-terrorist activities and the patterns across them, from the use of intelligence and military force to criminal law measures, financial controls and diplomacy; examines under what conditions states cooperate to suppress terrorism; and evaluates how existing international institutions been affected by the US-led "global war on terror," launched after the 9/11 terrorist attacks.

The book contests that the whilst there are several notable examples of successful counterterrorism cooperation, past and present, this work suggests that the broader trend can only be understood if we accept that across the domains of counter-terrorism policy, cooperation often resembles a competition for influence over outcomes.