Mavroidis: The Regulation of International Trade 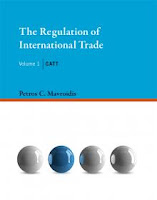 The General Agreement on Tariffs and Trade (GATT) was created alongside other towering achievements of the post-World War II era, including the United Nations, the World Bank, and the International Monetary Fund. GATT, the first successful agreement to generate multilateral trade liberalization, became the principal institution to administer international trade for the next six decades. In this book, Petros Mavoidis offers detailed examination of the GATT regime for international trade, discussing the negotiating record, policy background, economic rationale, and case law.

Mavroidis offers a substantive first chapter that provides a detailed historical background to GATT that stretches from the 1927 World Economic Conference through Bretton Woods and the Atlantic Charter. Each of the following chapters examines the disciplines agreed to, their negotiating record, their economic rationale, and subsequent practice. Mavroidis focuses on cases that have influenced the prevailing understanding of the norm, as well as on literature that has contributed to its interpretation, and the final outcome. In particular, he examines quantitative restrictions and tariffs; the most favored nation clause (MFN), the cornerstone of the GATT edifice; preferential trade agreements and special treatment for products originating in developing countries; domestic instruments; and exceptions to the obligations assumed under GATT. 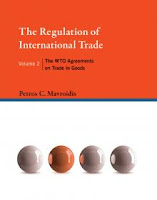 The General Agreement on Tariffs and Trade (GATT) has extended its institutional arsenal since the Kennedy round in the early 1960s. The current institutional design is the outcome of the Uruguay round and agreements reached in the ongoing Doha round (begun in 2001). One of the institutional outgrowths of GATT is the World Trade Organization (WT0), created in 1995. In this book, Petros Mavroidis offers a detailed examination of WTO agreements regulating trade in goods, discussing legal context, policy background, economic rationale, and case law.

Each chapter examines a given legal norm and its subsequent practice. In particular, he discusses agreements dealing with customs clearance; “contingent protection” instruments, which allow WTO members unilaterally to add to the negotiated amount of protection when a certain contingency (for example, dumping) has occurred; TBT (Technical Barriers to Trade) and SPS (Sanitary and Phyto-sanitary Measures) agreements, both of which deal with such domestic instruments as environmental, health policy, or consumer information; the agreement on Trade Related Investment Measures (TRIM); sector-specific agreements on agriculture and textiles; plurilateral agreements (binding a subset of WTO membership) on government procurement and civil aviation; and transparency in trade relations. This book’s companion volume examines the GATT regime for international trade.