Conference: Stateless Law? The Future of the Discipline 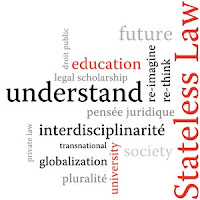 This event will aim to foster a debate that critically assesses the latest developments in legal thought and innovative approaches to law, in the light of the challenge of globalization and the move away from a national paradigm for understanding law. It will also ask the question of how to integrate the insights so gained into the teaching of law. The concern is with law in all its dimensions: public and private, local and transnational, formal and informal.

By being forced to abandon, at least in part, the posited law of the nation state as their lodestar, legal education and legal scholarship have been presented with an opportunity to break the mould of centuries of legal nationalism: an opportunity that encourages new, transdisciplinary and transnational ways of thinking about law. In short, the goal is to re-assess and to re-imagine the discipline of law, its place in the university, and its role in society.