Workshop: The Internet in Bello 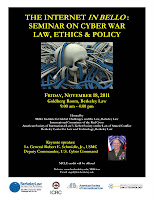 This Friday, November 18, the Miller Institute for Global Challenges and the Law at the University of California, Berkeley School of Law will host a workshop on "The Internet in Bello: Seminar on Cyber War Law, Ethics & Policy." The program is here. Here's the idea:

The seminar will examine legal, ethical and policy issues posed by cyber warfare. While much attention has been paid to jus ad bellum issues – examining when and under what circumstances a cyber attack constitutes an armed attack for the purposes of self defense – relatively little discussion has focused on how cyber warfare might require new rules, or new interpretations of rules, regarding the conduct of hostilities, or the jus in bello, once armed conflict has begun.

The Internet in Bello seminar will provide an opportunity for scholars and practitioners to explore issues such as intelligence-gathering and other means of ‘preparing the battlefield’; neutrality before and during cyber war, starting with how to interpret in the Internet era the traditional requirement that neutral States not participating in a given armed conflict not allow the movements of troops or weapons across their territories; as well as questions relating to how cyber operations intersect with the established rule that an attack is an act of violence, and the fundamental humanitarian principle of distinction, which holds that civilians should be protected against dangers arising from military operations.