Judgment: Maritime Delimitation between Nicaragua and Honduras in the Caribbean Sea 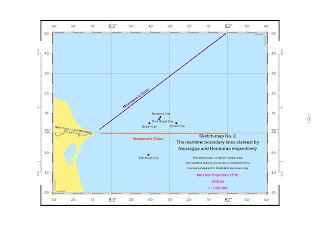 Today, the International Court of Justice rendered its judgment in the case concerning Maritime Delimitation between Nicaragua and Honduras in the Caribbean Sea (Nicaragua v. Honduras). Judgment here; press release here. Nicaragua filed its application on December 8, 1999, and the dispute, as the case name indicates, pertained to the delimitation of the maritime boundary between the two countries in the Caribbean Sea. The competing claims are shown in the map above; the Court's line is shown in the map below. Here's the judgment's dispositif:

Overall, this is a victory for Honduras, or, as the Honduran newspaper El Heraldo puts it, "Honduras triunfa en La Haya, regocijo en todo el país."